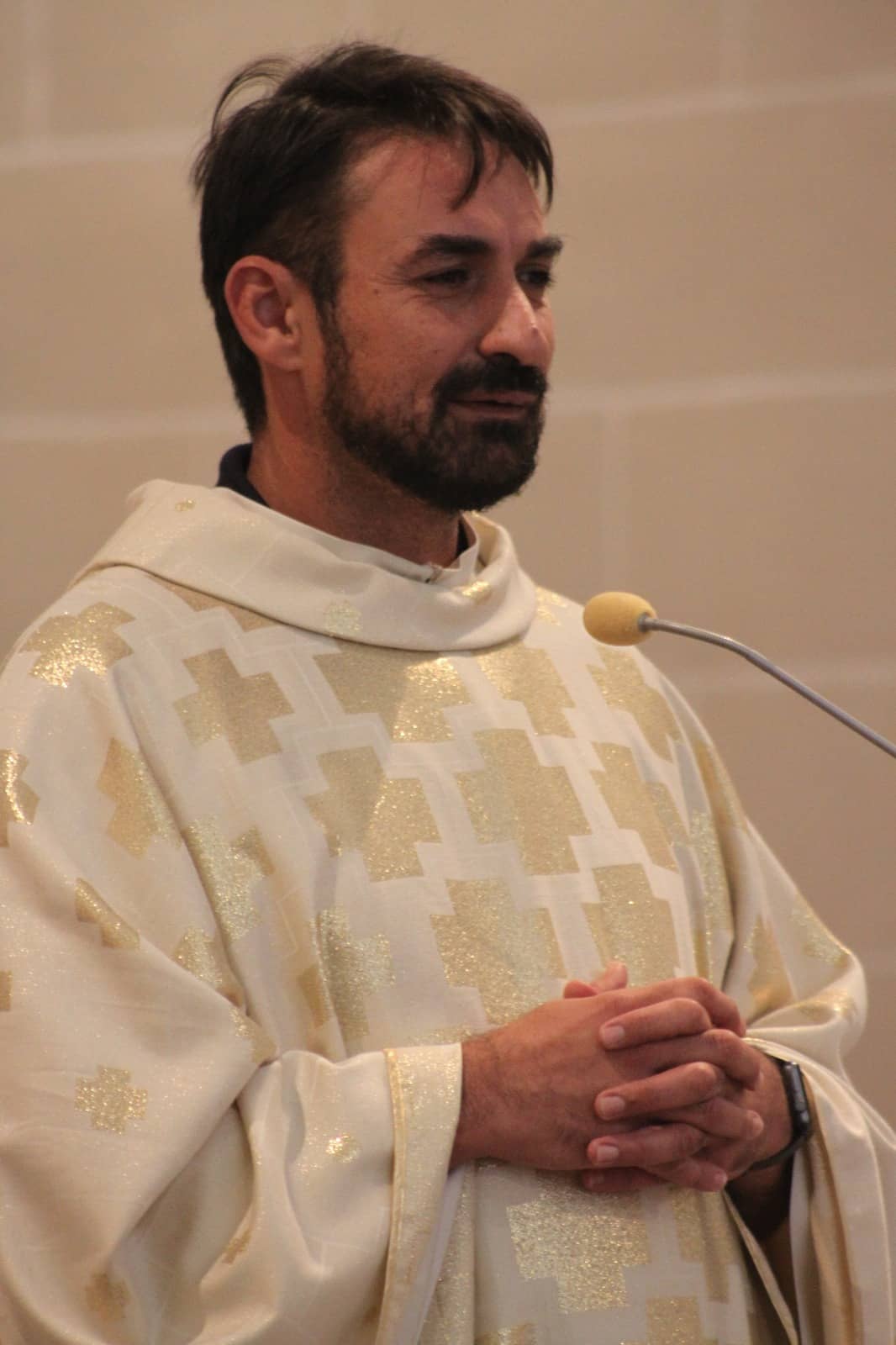 Many people often remain astonished to hear that in our Maltese Franciscan Order we have an ex-seafarer. Fr Colin Sammut OFM Conv, in this interview shares with us his experience as a seafarer and also about his new experience as a Fraciscan Priest. We know that the connection between sea and discipleship is not a new one. It was founded with Jesus. The first ever disciples earned their living from sea...they were called and made fisherman of men. So Fr Colin is in line with the first called: Andrew and Peter. Let us now read his wonderful experience.

1. How and when did you become a seafarer?

Ever since I can remember, the sea was one of my greatest inspirations with its extreme moods, from rough to calm that resonates with human lives as regards to attitudes, emotions, feelings, sentiments and thoughts that reflects the depths of the human heart. The sea always fascinated me whether it was the sea breeze that always beckoned me towards it like a breathe of new life during the Maltese hot summers or in winter when the air is filled with revitalizing sea spray scattered by rough seas and roaring waves that offered me reasons to believe that, ultimately, it is only through violent change, that life can truly emerge. In this sense, the sea was for me a mirror of life, my own life, growing up in a town very close to the sea, in the St. Paul’s Bay area, on the NW coast of Malta. Perhaps it was this affiliation with the sea from a very small age that has made me want to take up navigation and set sail.

It was when I was in High School studying for my Intermediate and Advanced Level examinations and only 16 years of age that I felt the pull to enrol in the Merchant Navy. So after finishing High School just before turning 18 years old, I was admitted at the Maritime Institute for a three-year course to become a Second Officer, with the aspiration of becoming a Sea Captain.

From the beginning I felt I was at my element at the Maritime Institute and by the end of the first month I was completely immersed in the Maritime world. The knowledge received was simply exquisite and I really enjoyed every minute of it. That was the year 1999 and by September 2000, I was already aboard a sea vessel to complete my sea time as a cadet and then returned back to Malta in October 2001 to complete my final year of studies.

2. What kind of ships did you work on and which routes did you sail?

My maritime career is relatively very short, and my experience of ships is limited to one ship. Nevertheless, I would say that the best teacher was the sea itself and the experience of it is immeasurable.  Being at sea with highly professional people has helped me with my personal development and the places I have visited opened my horizons. The ship I studied on was a container motor vessel. She was a 40,000-ton vessel, over 250m in length and about 35m in breadth. We operated across four continents – Europe, North Africa, Asia and North America. The route was circular and took us about 2 and half months to complete. Hong Kong was our main port of call from which we commenced and concluded every voyage.

However, setting sail towards the east meant calling at the ports of Yantian – China, Keelung - Taiwan, Pusan – South Korea, and then across the Pacific Ocean which would take about two weeks at times, depending upon the weather. Sometimes we reached very high latitudes and coasted the Alaskan shores, like the ports of Los Angeles, Oakland and San Francisco. Usually in the US we would spend about a week. Then set sails again heading west, once more across the Pacific, to execute the following route of ports and seas: Pusan, and then Keelung, Hong Kong, Chiawan – China, Jakarta – Indonesia, Singapore, and Port Klang – Malaysia. Then from there across the Sumatra strait, reaching the Indian Ocean where we would steer towards Colombo in Sri Lanka, then through the Yemen strait, the Red Sea and the Suez Canal. Each time we got to the Mediterranean I use to feel nostalgic for home, since the next port of call was Malta. From there we would leave for Barcelona – Spain, to Marseille – France, Genoa and Naples – Italy and once more we called at Malta before starting the east bound route once again.

Rather than work itself, I reckon that the hardest part of life at sea is being away from home, family and friends. Solitude could be enormous and perhaps it is the toughest bit. The rough sea can also offer challenges even to the most experienced seamen. The confrontation between the ruthless force of the natural elements and the frailty of human nature was always paradoxical for me. I mean, the ship an icon of Human strength and greatness that dares to disturb the calm waters sailing across them, and yet would be greatly intimidated by the wind and the gigantic waves, by their boldness really, because she knows, that the sea is tougher and much more robust than her hull! From this paradox I often concluded that no matter how strong a ship might be, she must forever be prudent.

Working on a ship required from us special attention and vigilance, of course like any other work, but at sea, it was somehow different, since a task not properly done, or duty not appropriately fulfilled, could cost the life of someone else, or otherwise compromise the safety of the ship, or again damage the cargo. In this sense, the hardest part of work was to do everything out of prudence and this meant not only act rationally and meticulously but also overlook emotions, and to foresee the result of a certain rational action.

At the time, everything was new to me, and amidst this novelty, I was often unable to judge an experience, especially regarding the daily life on-board. I was still in a learning phase and therefore aware that my criteria needed further refinement. Nevertheless, an experience that baffled me enormously occurred one morning in the South Pacific Ocean, about 200 miles off the coasts of the Hawaiian Islands.  The previous days where dramatically marked by an outraging Typhoon. The storm passed, but the ocean was still restless and disturbed, the swell was about 4 meters high. We received a MAYDAY distress signal from a ship nearby. She launched the alarm because three of her men went overboard; literally, they were swept overboard by the waves!

Since we were in the vicinity of the accident, it was also our duty to partake in the search and rescue operation coordinated from inshore authorities. The alarm for the lookout sounded all over our ship and in no time all the seamen were at their posts. Together with other vessels we searched and searched but all in vain. Hours passed and there was no sign of these poor souls. After considerable time, the coordinator gave the order to abort the SAR operation. I remember perceiving this order as a sentence of death, as a severe judgment on these men, but again, we did all we could do. I recall, I had many mixed feelings about those happenings. That day impressed me profoundly, I felt helpless.

Of course, I was at sea studying in the hope to make a living of it eventually.   However, I often wondered if this was the main reason for it.  As I said before, the sea always fascinated me; had it been a calling, then I’d say, my presence aboard was the response to the call. Actually, I find this question very difficult to answer. Obviously, I liked being there. I liked the wind, the starry nights, sunsets and dawns, the storms, the rough and calm seas, the silence, the salty taste in the air. I also enjoyed, encounters with people from different countries with multi cultural backgrounds. I visited places that no tourist would ever visit. Being at sea, was like a mission I always admired and something I longed to do for a long time. In this sense, ultimately, what really mattered was being at sea and fulfilling most of my expectations, for which I am full of gratitude.

The first time the thought of priesthood crossed my mind was some weeks before I had to sign on the ship. At the time, it petrified me, I couldn’t believe it; actually I couldn’t believe that my mind could ever think such a thought. I tried to rationalise it, to mute it, to ignore it, to avoid it as much as I could, but in truth, I simply could not. Actually, it became stronger from day to day, and it grew in momentum until it literally pushed me closer to God. I started experiencing God as I have never done before. The thought of priesthood followed me aboard the vessel and it became my companion, and I grew to like it, to enjoy it, until I accepted it with all my heart and then it flourished and blossomed.

Aboard, I remember, reading the Holy Scriptures, the life of St. Francis, the Confessions of St. Augustine and the Imitation of Christ, and this was certainly consoling reading, from which my soul pursued peace and restfulness. Looking back, metaphorically, I would say that, sailing from port to port during that year was actually me sailing towards the real call God had incepted in me many years before. Perhaps, the attraction I always felt for the sea was a veiled pull towards God. Once the time was appropriate and I found the audacity to embark, it was then; that I plunged into the mystery of my life lived according to His Divine Plan. If there was a veil concealing His face from my eyes, it was lifted, and even though not clear, I could see some light. Whilst at sea, therefore, I did not only think about priesthood, but I actually felt the call deeply rooted in me – sailing from port to port led me to deepen my knowledge of God and of myself.